The Cause of Depression?

The incidence of many deadly diseases has increased dramatically over the past 50 years.

Heart disease, cancer, diabetes, obesity, and Alzheimer's disease are at epidemic proportions and are projected to get even worse over the next 50 years.

The same is true of depression - which is one of the highest cause of disability worldwide.  Sadly, over 120 million people suffer from depression - and this number is increasing 20% per year.  At the same time, anti-depressant drugs are a multi-BILLION dollar a year business.  Believe it or not, pre-school children represent one of the fastest growing segments of the anti-depressant drug market!  Pre-school children!!

What is the cause of depression?

For years, psychiatrists and psychologists have reported that depression is a "mental illness".  New information, however, suggests that the cause of depression may be different from what we have believed to date.

It is now being determined that the food we have been eating for the past several decades may be a major cause of depression - and many of the other diseases mentioned.

Although it is somewhat complex, it can be very simply represented represented like this: 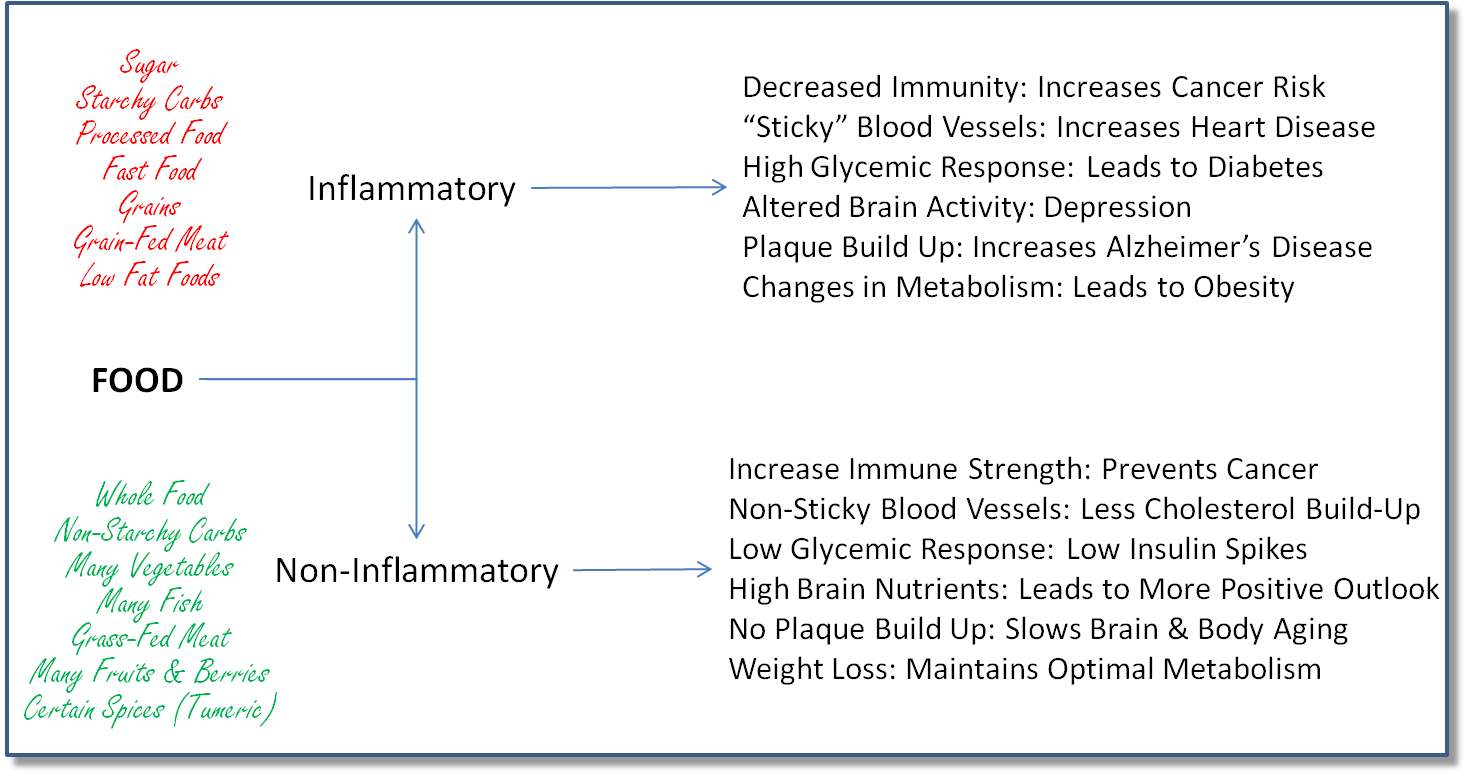 Unfortunately, the foods most of the population eats (the low fat, high carbohydrate, high sugar, processed and fast foods) are highly inflammatory and actually contribute to these diseases (and perhaps even causes them).

Even worse, the medical system has done little to address the issue.  For many reasons, some of which are totally legitimate, treatment of these diseases does little or nothing to address the underlying cause, but rather is just meant to manage the most profitable part of the process.

You see, there is little money to be made by pharmaceutical companies by just telling people to eat differently.  It is much more profitable to get people to reduce their cholesterol with a drug, for example, even though cholesterol is probably not the cause of cardiovascular disease.  It is simply a symptom.  The cause of the disease is probably inflammation.  Similarly, there is significantly more money in selling an anti-depressant to millions of people so they "feel better" rather than have them eliminate the underlying problem with the proper nutrition.

For a simple, somewhat exaggerated analogy, consider this:

Let’s say you are building something using a hammer and some large nails.  Now, imagine an accident occurs where one of the nails gets hammered right through your hand.  Ouch!!  Very painful, right?

Well, you would certainly be rushed to the emergency room at the nearest hospital.  That part is certain.

But now, just imagine that the doctor at the emergency room takes a look at you and says, okay, we’ll take care of that right away.  So, he or she orders some pain medicine and sends you home – without taking out the nail.  Crazy, isn’t it?  Of course the doctor in this case would never do that.  He or she would take out the nail first (in other words, deal with the cause of the pain).

But "leaving the nail in" and just treating "the pain" is exactly what is happening in our medical system today with many of the deadly diseases which affect millions of people every year.  Instead of "removing the nail", "pain medicine" is given, many times for years, and is therefore much more profitable.

To help you see what I mean, let’s take this a step further.  Imagine you are sent home with that nail still in your hand.  You take the pain medication, so you feel little or no pain.  And, as long as the nail remains in your hand, you "need" the pain medicine (probably in increasing doses as the inflammation gets worse).

As the inflammation gets worse, gangrene and infection would set in and you would probably have to have your arm amputated.  Eventually, even though you have little or no pain due to the continuous pain medication, you would die from this nail in your hand.

The same is true of many of the diseases we are treating with “drugs” these days, including possibly depression.  And, not only are these drugs not addressing the problem, they all have very bad side effects - so they are also causing harm.

Take statins, for example.  These are the drugs used to lower cholesterol in the blood.  But cholesterol sticking to the blood vessels and causing heart disease is just a consequence of the underlying problem.  The real problem (the cause – or the “nail” in this case) is inflammation, which is created by the the food most people eat (the "modern" diet).  It’s the high Omega-6, high carbohydrate, high sugar, low fat, processed and fast foods the majority of the population eats that represents the nail.  These are the things that cause inflammation in the body, which is what is killing us - literally - by causing many chronic diseases and requiring us to take drugs to "ease the pain".

Even depression is now being considered as one of the diseases caused by inflammation, which again, is a result of the foods most people eat. Fifty years ago, when people ate whole, less processed, higher "good fat" foods with less added sugar, depression was much less prevalent.  The same is true for heart disease, cancer, diabetes, obesity, and Alzheimer's Disease.

By removing these high processed, sugary, low fat foods from our diet, it’s like removing the nail, which is the cause of the problem.  In this case, there would be little need for most of the drugs many people take – which contributes to our health problems.

Part of the Problem...

Pharmaceutical companies make BILLIONS of dollars every year by providing drugs to address the “symptoms” of these diseases, many of which do nothing for the cause.  Even worse, not only do they not address the cause, as mentioned previously, nearly all of them have serious side effects – so they are also doing harm.

The statins, for example, have done absolutely NOTHING to reduce the incidence of cardiovascular disease and death from heart attacks.  Yet, they represent another multi-BILLION dollar a year business.

The same is true for many other diseases – and the drugs used to “treat” them.

Anti-depressants, for example, have also done absolutely nothing to reduce the incidence of depression or reduce the effects of depression on our "disability" as a society.  As stated previously, depression has increased dramatically over the past 50 years - the same period of time in which the use of anti-depressant drugs has skyrocketed.

Now, I am not saying there is no place for prescription drugs.  I am just saying it has gotten out of control.  I am also not saying there would be no more depression if everyone ate healthier.  I would bet, however, depression would be much less of an issue - just like it was 50 years ago.

Do You Eat a Healthy Diet?

As mentioned several times, the incidence of these diseases (cancer, heart disease, diabetes, Alzheimer’s disease and depression) continues to increase.

All these diseases are more prevalent today than they were 50 years ago, despite all the advances in medicine and the scientific “knowledge” determined over the past several decades.  Part of the reason for this is our diet over the past 50 years.  By changing the way we eat, we can live longer and healthier, without the need for drugs.

The question is, with all the information out there regarding the healthiest nutrition (some of it conflicting) – what should we believe?

Certainly grass-fed beef is a bit more expensive than grain-fed beef, but when you factor in the medical costs and the prescription drugs you could avoid later in life (which could be hundreds or even thousands of dollars per month), the cost savings could be huge by just switching to grass-fed beef now!  And there are many other simple changes anyone can make to change the course of health dramatically.  All this is found in the simple ebook.  So, for 99 cents, download it now.

There are also several other resources and products I recommend to provide the latest and healthiest information to help anyone live healthier, happier, with less disease and less need for prescription medication.