Yes, you can love working, even if you don't particularly like your job.

Howard had woken at 3:30 a.m. to catch a flight to Los Angeles, which would be followed by an oft-contentious meeting with the leadership of a workers union. First on her agenda was to try to negotiate some $700,000 in concessions from the union leaders to help ensure the hotel partnership avoided bankruptcy. Previous union meetings had devolved into vulgar screaming matches, and Howard had every reason to believe this one would be the same, or worse.

So she changed her approach. While waiting to board, she pulled out her journal and reflected upon everything in her life she felt grateful for. She then extended those feelings to the union leaders. Rather than visualizing them as the enemy, she focused on their commonalities. Both she and the union leaders were concerned for the employees' well-being, and everyone was just trying to do their jobs.

Come meeting time, she was rid of her usual nerves and says she "floated" through the discussion. The talk turned thoughtful rather than forceful, and she was able to truly listen and move the conversation forward. The ease and effectiveness of the potentially horrible meeting elated Howard, setting the foundation for her belief that happiness on the job matters.

Happiness is in vogue, and everyone--from psychologists to academics and career coaches--has advice on how to find it and how to keep it. Juxtapose that with a workforce that is more stressed out and cynical than ever. After a recession where millions of jobs were lost, remaining workers are doing more work with fewer resources and a heavy helping of distrust in management. Is it possible to find happiness at work these days? These experts say: Yes. Start now.

In her new book Happiness At Work (Wiley-Blackwell), Jessica Pryce-Jones calculates that workers will spend an average of 90,000 hours at work in their lifetimes. In an attempt to make that time more pleasant, she pinpoints the major elements that contribute to a person's happiness or discontent. She believes if a worker has high levels of confidence, commitment, conviction, contribution and culture fit, paired with feelings of recognition, pride and trust in the company, they will achieve their potential at work.

"These items are low right now because of the economic climate we're in," says Pryce-Jones. "I'd advise thinking about the tasks and relationships in your job that you really enjoy, and figure out how to maximize them."

In her research, based on recent studies, interviews and case studies, Pryce-Jones was surprised to find that women are generally happier at work than men. Women report being happy 66% of the time, a significant improvement over men's 53%. Women also say they are focused and on-task 72% of the time, compared with men's 66%, and work four hours less per week than male counterparts. Status and longer hours contributed to men's happiness, while active learning and shorter hours were likely to make women happier.

Conversely, women feel less resilient, says Pryce-Jones, which is a good predictor of general happiness. To improve resiliency, she suggests carving out restorative time each day, whether it's exercise, meditation or quiet reflection. Also, she says, you feel least resilient when you feel lack of control. The simple act of writing out a to-do list and working on tasks in order will give you a sense of control and composure. "Alcohol and TV won't help," Pryce-Jones adds.

Other approaches to happiness are centered more on attitude and perception. "We expect that something has to happen in order for us to be happy," says Srikumar Rao, professor at the London Business School and author of upcoming Happiness At Work(McGraw-Hill ( MHP - news - people )). Rao says that while we push our prospects of happiness into the future--I'll be happy once I get a promotion, my bonus, the corner office--we're missing out on the chance of happiness at work right now. "We don't recognize that we have tremendous control over our happiness."

The biggest obstacle to women's happiness at work, Rao says, is the desire for perfection and guilt over not fulfilling it. Moreover, both women and men have a constant stream of reactive thoughts, termed "mental chatter" by Rao, who says they are often "brutally negative."

To combat this barrage of negativity, Rao advises workers to stop labeling things as good or bad. "The moment you say something is a 'bad' thing, you experience it that way," he says. "You live your life in a constant cycle reinforcing itself." He rejects the theory of positive psychology--thinking happy thoughts will make it so--because he says it's a form of self-deception. Rather, he suggests accepting situations as they are.

So the next time you go to the coffee machine and find it's out of water, rather than grumbling at your thoughtless coffee-hogging colleagues, you may find more contentment in accepting it as a fact of life. Plus, events that seem to be bad at first often evolve into good things in the future, he says. In the spirit of mental wellness, throwing out labels will be helpful toward developing happiness on the job.

Working toward goals seems to work, too. Professor of psychology at San Francisco State University Ryan Howell co-authored a study last year which found that working hard to improve a skill or ability may induce greater stress in the moment but also grants greater happiness on a daily basis and in the long-term. "No pain, no gain," he says. "If tasks aren't enjoyable in the moment, the sense of accomplishment when the task is over changes that perspective."

Howell found that reaching the goal isn't even necessary to increase happiness--the process of trying and stretching yourself is enough. It seems the theory has a practical application in today's market, too. Learning new skills may make you happier, but it also makes you more valuable to your employer.

Current work atmospheres certainly don't lend themselves to parties at your desk, though. Organizational psychologist and New York University professor Ben Dattner believes the balance of power that may have previously favored employees has shifted back to companies, and companies have let employee satisfaction fall by the wayside.

But individuals can still thrive. He says: "People who derive meaning from their work or feel commitment to their organization's mission are people who are much more immune to the dissatisfaction of the economic environment."

For those who really can't relate to the company mission, Pryce-Jones suggests you reconnect with your personal mission. You always have the choice not to go to work, she says. So why do you go everyday? Is it to provide a stable and secure home for your children or family? Is it to build the resources to be able to travel, or to buy a house that will fill you with pride? "Tap into your deeply held values," she says. "Connect to what is worthwhile to you." 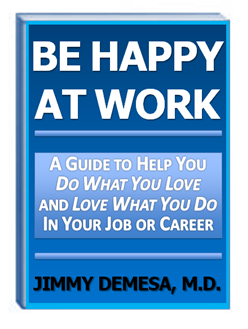 
Or Get It FREE Here
Along With 2 Other
FREE Books...