Give ... to Be Happy
(How Contribution Makes Us Happier) 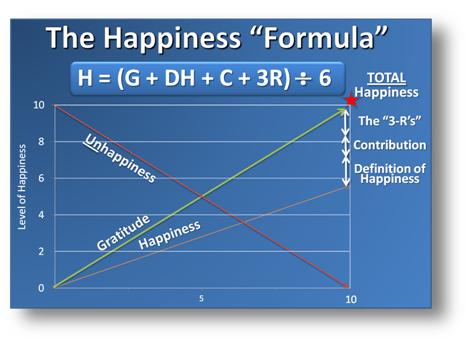 Yes, psychologically, we are "wired" to give.  And really, we must "give to be happy" (as shown in my "Happiness Formula").

Physiologically, contribution activates the same "pleasure" centers of the brain that are activated by food, sex, and drugs.  So, you see, we really must give to be truly happy in life.

On a summer morning in Vancouver, British Columbia, a graduate student  approached people randomly with a box of envelopes and an unusual request: “Are you willing to be in an experiment?” If people said yes, she asked them how happy they were, got their phone number, and handed them one of her mysterious envelopes.

When people opened the envelope, they found a five dollar bill, accompanied by a simple note. For some of them, the note instructed:

Please spend this $5.00 today before 5pm on a gift for yourself or any of your expenses (e.g., rent, bills, or debt).

Others found a note that read:

Please spend this $5.00 today before 5pm on a gift for someone else or a donation to charity.

In addition, some people got similar envelopes, but with a 20 dollar bill rather than a five. Armed with this extra bit of cash and their instructions about how to spend it, people went on their way. That evening, they received a call asking them how happy they were feeling, as well as how they had spent the money.

How did their purchases affect them?

By the end of the day, individuals who spent money on others - who engaged in what we call “prosocial spending” - were measurably happier than those who spent money on themselves - even though there were no differences between the two groups at the beginning of the day. The amount of money people found in their envelopes - five dollars or 20 - had no effect on their happiness. How people spent the money mattered much more than how much of it they got.

This experiment suggests that spending as little as five dollars to help someone else can increase your own happiness. Similarly, in a representative sample of more than 600 Americans, the amount of money individuals devoted to themselves was unrelated to their overall happiness; what did predict happiness was the amount of money they gave away: The more they invested in others, the happier they were. This relationship between prosocial spending and happiness held up even after taking into account individuals’ income.

And it extends well beyond North America: A survey conducted by the Gallup World Poll between 2006 and 2008 found that in 120 out of 136 countries, people who donated to charity in the past month reported greater satisfaction with life. This relationship emerged in poor and rich countries alike—again, it held up even after controlling for individuals’ income. Across the 136 countries studied, donating to charity had a similar relationship to happiness as doubling household income. The link between prosocial spending and happiness seems to be remarkably universal.